This formula has proven invaluable to the type of glazing that my painting process requires. One can grind their paint using  Black Oil and arrive at a high saturation of pigment heretofore unattainable through commercial paint. When used correctly, Maroger Medium creates translucency and radiance with the added benefit of overnight drying time so oil paint can be worked on again in 24 hours. This allows for many layers of glazes which illuminates by light passing through all and returning to be enjoyed by the viewer's eye!
A Brief History of Oil Painting and Medium

Oil painting developed over time, as most things do. It is said that oil paint itself emerged out of egg tempera painting when artists began mixing the oil they used to varnish the surface of their paintings directly into their dry pigments instead of with egg yolk or other protein.  Perhaps one of the most important contributions toward the development of the secret medium was Jan Van Eyck (originally an egg tempera painter). In 1410BCE he discovered special properties of boiled oil as opposed to raw oil. In 1441, before his death, Van Eyck divulged the secret. He is actually credited by some to have made it possible for printing ink and the Gutenberg Bible in 1452 (Maroger, 1948)!

Antonello de Messina(1430?-1479?) apparently added lead to Van Eyck's medium. He took it back to Italy, and there it was picked up by  Giovanni Bellini(1413-1516?). It is believed that he stole the medium from de Messina during a feigned portrait consultation- Once Bellini introduced the medium to Venice its use exploded! Soon artists like Michaelangelo, DaVinci, Titian, Raphael, and many more were using a form of the medium?..And as ateliers in Italy became "de rigeur" for all career seeking art students, the formula was passed down (Maroger, 1948). 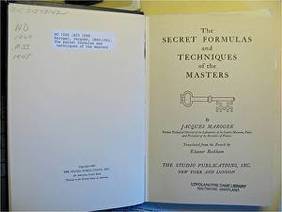 There was only one problem: Artists were very reticent to give up their "secrets to success", and this included the formulas and techniques they used. Medium formula was so guarded that the Italian medium (from Messina through Rubens) was completely lost with the death of Jacob Jordaens in 1678. Rubens had shared, but his students were possessive and it died with them. As master artists died, they took their secret formulas with them. By the beginning of the Nineteenth Century, no trace could be found.-Only Black Oil Remained until?


The lost technique and formula were meticulously researched and discovered by Jacques Maroger, former Technical Director of the Louvre from the 1930's to the 40's.